DuraBric production doesn’t need wood and has a much lower carbon footprint. Moreover their formal regularity and mechanical resistance are much better than those of handmade kiln-fired bricks.

The Droneport is built without formwork, into the air. The DuraBric is made of soil, sand and 5% cement. LafargeHolcim has worked on a lighter version of this compressed-earth brick.

DuraBric production doesn’t need wood and has a much lower carbon footprint. Moreover their formal regularity and mechanical resistance are much better than those of handmade kiln-fired bricks.
» Download high-resolution version (JPG, 11.52 MB)

The Droneport is built without formwork, into the air. The DuraBric is made of soil, sand and 5% cement. LafargeHolcim has worked on a lighter version of this compressed-earth brick.
» Download high-resolution version (JPG, 3.26 MB)

Among the teams that developed the Droneport, LafargeHolcim was responsible for the compressed-earth Durabrics which, combined with traditional fired clay tiles, were used to build the first prototypes. Ivan Serclérat, Technical Support Manager at the LafargeHolcim Research Centre, explains the challenges they faced.

L’Architecture d’Aujourd’hui: What were the initial objectives for your compressed-earth DuraBric?

Ivan Serclérat: The goal was to develop an affordable and ecological solution. When I say “develop”, we didn’t actually invent anything, it’s a technology that has been around for a long time, particularly in Latin America. We just added a bit more science, and a more global vision thanks to the size of the group and the diversity of its know- how, which allowed us to bring added value to the whole chain of production. We developed the soil analysis so that you can get the right mix, as well as the compression technique, we looked at which were the best production methods, and also optimized the construction system – roofing, foundations, dealing with damp, building design, construction management, etc.

AA: Is the technology fully transferable from country to country?

IS: Yes. The idea is to have a level of technology that is as light as possible so you can export it, and to adapt the production methods, whether manual or automatic, to the size of the project in question.

AA: Soil can vary greatly in composition. How do you carry out a soil analysis?

IS: Yes, soil composition changes enormously, even on the same site as you dig down. So we developed very simple tools that can be used on site to see if the soil needs correcting – tools as rudimentary as a sieve and a measuring cylinder. First of all you carry out a granulometric analysis, to see how much sand there is, then a test to estimate the amount of clay – you make soil sausages to check the cohesion of the mix. It’s all very hands-on. Once you know the percentages of sand and clay, you can adjust if necessary.

AA: Unlike traditional dried-earth bricks, the DuraBric contains cement. What are its advantages?

IS: In many African countries, traditional bricks are fired in wood kilns, which contributes heavily to deforestation. DuraBric production doesn’t need wood and has a much lower carbon footprint. Moreover their formal regularity and mechanical resistance are much better than those of handmade kiln-fired bricks. As for the cement, it only constitutes about 5% of the composition, so as to remain a ordable. The cement makes the DuraBrics more resistant to water than pure earth, reducing the absorption of damp and binding the grains of soil together.

AA: What were the challenges when using DuraBrics to build the Droneport?

IS: The design consists in a thin vault, whereas the DuraBric was relatively thick and dense, since it was intended for loadbearing masonry walls. DuraBrics are designed to be strong in compression, whereas in the Droneport they must be resistant to bending and need to be pretty slender. When reducing their thickness, the challenge was to obtain sufficient mechanical resistance along their length. We had to re ne our mix so as to optimize the ratio between soil, sand and cement, and adjust the strength of compression.

AA: When building the prototypes, you ended up using a mix of DuraBrics and fired clay tiles.

IS: The Droneport vault is built without formwork, out into the air, thanks to fast-drying mortar. Despite a successful first try-out, in Venice, perhaps because of the mortar used or because of the high level of air humidity, the DuraBrics wouldn’t hold in place. Given the short timescale, we built the first layer in traditional clay tiles, which are lighter, and used DuraBrics for the rest. Since then we’ve developed much lighter DuraBrics, reducing their weight by 30% so that they’re perfectly compatible with the technical requirements of the Droneport vault.

“This skilled geometrical vault holds the promise of a brighter future”, writes Editor-in-chief Emmanuelle Borne in the latest “hors série”… 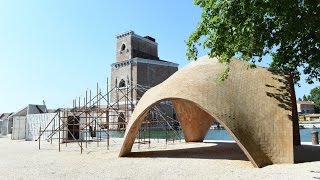