Alejandro Aravena at the 4th International LafargeHolcim Forum in Mumbai.

Alejandro Aravena: “Sustainability is nothing but the rigorous use of common sense.”

Alejandro Aravena: “Sustainability is nothing but the rigorous use of common sense.”
» Download high-resolution version (JPG, 949.27 KB)

Alejandro Aravena, Partner Architect at Elemental (Chile) and Board member of the LafargeHolcim Foundation since 2013 has been selected as 2016 Pritzker Prize laureate for “leading a new generation of architects with a holistic understanding of the built environment”.

“His built work gives economic opportunity to the less privileged, mitigates the effects of natural disasters, reduces energy consumption, and provides welcoming public space. Innovative and inspiring, he shows how architecture at its best can improve people’s lives,” stated Tom Pritzker, Chairman and President of The Hyatt Foundation which funds the Pritzker Prize.

Live Webcast of the Awards Ceremony

The Pritzker Prize Medal will be conferred to Alejandro Aravena at a ceremony taking place on April 4 at United Nations Headquarters in New York. A live webcast of the Awards Cermeony will be available on the website of the United Nations Web TV. The broadcast will start at 7:30pm Eastern Standard Time.

On April 5, current and former Pritzker Prize Laureates will meet at the United Nations Headquarter again to discuss the "Challenges Ahead for the Built Environment": The event will include Glenn Murcutt, Renzo Piano, Richard Rogers, Wang Shu, Thom Mayne, Richard Meier, and Christian de Portzamparc and can also be followed as webcast at webtv.un.org. The discussion discussion will start at 6:30pm (EST).

Alejandro Aravena is also curator of the 2016 International Architecture Biennale in Venice which will focus on reporting “from the front” on innovation and implementation of architecture that focuses on improving quality of life, including two projects that are being supported by LafargeHolcim.

Alejandro Aravena’s work includes the Sustainable post-tsunami reconstruction master plan in Constitución, Chile for which he was honored with the Holcim Awards Silver 2011 for Latin America. He was a keynote speaker on “Commonsense principles of sustainable construction” at the 4th International Holcim Forum (pictured above) and a guest speaker at the 10th Anniversary of the Foundation.

He was also a member of the Global Holcim Awards jury in 2015 and participated in the Holcim Roundtable for Sustainable Construction in 2014 and 2015.

For more information on Alejandro Aravena 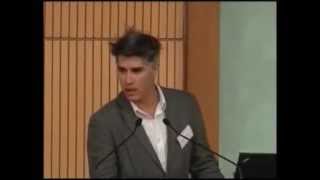 In his keynote speech at the 4th Holcim Forum 2013 in Mumbai, Chilean architect Alejandro Aravena reported on the …

Alejandro Aravena is Partner Architect & Executive Director of Elemental, Chile; a member of the Board of the LafargeHolcim Foundation...