The housing complex for employees of a hospital in Léo incorporates design strategies of traditional rural villages.

Francis Kéré is Principal of Kéré Architecture, based in Berlin, Germany. His material-sparing school design, using cement-stabilized clay and lightweight steel frames, is often built by unskilled labor with an elegant economy of means.

Laterite is a widely available and very practical building material.

The primary school in Gando is built of clay, a material that no longer had a good reputation among the local population.

The pavilion of the Serpentine Gallery in the UK is based on the same principles as the buildings in Burkina Faso.

The primary school in Gando is built of clay, a material that no longer had a good reputation among the local population.
» Download high-resolution version (JPG, 835.97 KB)

The pavilion of the Serpentine Gallery in the UK is based on the same principles as the buildings in Burkina Faso.
» Download high-resolution version (JPG, 1.31 MB)

In Burkina Faso, as in many African countries, architecture is still strongly influenced by European ideals – introduced during the colonial period. Francis Kéré opposes this. In his keynote speech, he showed how he promotes locally anchored, autonomous architecture using local materials.

“In Burkina Faso, urban planning was introduced through colonialism,” said Francis Kéré. This historical background is still relevant today. In the capital Ouagadougou, one can still see the intention to create a second Paris. Even in people’s minds, colonialism remains an influencing factor: The prevalent notion of what makes good architecture is still strongly influenced by European ideals.

Francis Kéré explained that this was why his first building project in Burkina Faso met so much resistance. When he wanted to build a school in Gando after he finished his studies in Germany, everyone was initially proud. There was no school in the village at that time. But when the residents found out that the school was to be built of clay, they were disappointed. “Because in the eyes of the people of Burkina Faso, a schoolhouse is something from France,” explained Francis Kéré. “And it therefore has to be made of glass, concrete and steel.” 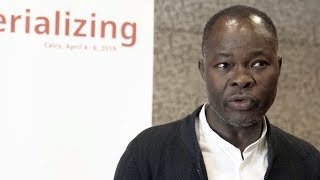 This is a big problem in Burkina Faso, the architect said. “We love Europe – but in the end, we’re just left with cheap copies.” Francis Kéré chose a different path. “I wanted to use the most widely available material.” So, despite the initial resistance of the population, he opted for clay as a building material, which was processed using the local workforce. Because many of the construction workers could neither read nor write, the architect deployed aids such as mockups. The building that thus arose is simple but effective. At a place where average temperatures of 40°C prevail, cooling is imperative. Francis Kéré relied on simple means of cooling such as many openings and a simple ventilation system. In the meantime, the local population has become convinced of the new schoolhouse – and the building is still in top condition. “This is the way we have to go,” said the winner of the Global LafargeHolcim Awards Gold 2012, “adapted to the local environment and inspired by tradition.”

This principle can be applied to more than choosing the right building materials. Burkina Faso also displays vernacular architecture that is not oriented toward Europe but instead is well adapted to local conditions – and has proven its value. This architecture must be rediscovered and further developed, and that is precisely what Francis Kéré does. For example, when he was commissioned to design a housing complex for the staff of a hospital, he studied the construction and design of traditional villages and applied the essential features to the new project: ample interstitial space, open roof assemblies, and recreational spaces between the individual components of the complex. This way of building is actually anchored in the tradition of the country but was largely lost through the course of colonialism. Today, the lessons of history and the use of local materials have led to “a renewal of the way we do things,” said Francis Kéré – emphasising the importance of this new old way.

Architecture is not an isolated discipline; the rediscovery of our own attributes is about more than just individual buildings. “I think we have to let Africa grow and go its own way,” stated Francis Kéré. His architecture is an expression of this conviction. “As technicians from this continent, we have a burden: Where to go? What to do? Should we create towers? Glass palaces?” he asked – of course rhetorically, because he does exactly the opposite. He is committed to doing his part to help Africa find its own way again.

This work essentially requires great persuasive effort, which Francis Kéré must expend again and again, for example, with the construction of Lycee Schorge High School in Koudougou. Laterite was to be used as a building material. This rock is widespread in large parts of Africa, including Burkina Faso. Laterite is highly ferrous. During mining it is soft and malleable but when it comes into contact with air it hardens. “It’s a miracle,” said Francis Kéré. The material is inexpensive, easily accessible, and ideal for the production of building blocks. “But, like clay, it is rejected by the local population because it is a poor people’s material.” Such prejudices must be overcome. “So, what I did was cutting it while everyone was watching,” said Francis Kéré, “and this way people were convinced. The key to making people believe is to make them see the positive result.”

After initially being rejected, his buildings are always ultimately accepted by the population – sometimes even to the surprise of his clients, told Francis Kéré. His approach is gaining influence. His persuasive efforts are effective – on one hand because of the commitment of the architect, and on the other because the advantages of local, traditional ways of building are plainly obvious.

This approach applies not only to Africa, Francis Kéré added. He presented one of his latest projects: the pavilion of the Serpentine Gallery in London. Here, too, tradition is at play. His design drew on London’s traditional textile patterns and masonry-bond patterns. Francis Kéré opted for a local, widely available building material: wood – because “even the richest nation cannot afford to waste a lot of material.”

This article is based on the keynote address of Francis Kéré at the LafargeHolcim Forum “Re-materializing Construction” held in Cairo, Egypt in April 2019.

“Inspired by tradition, adapted to local environment” in Re-materializing Construction

Francis Kéré is Principal of Kéré Architecture, based in Berlin, Germany, winner of the Global LafargeHolcim Gold (2012) and was a speaker...