Fibonacci Microlibrary as an “urban ruin” in the middle of the lush park. It is a pavilion made of lightweight concrete, open on all sides, and is therefore very inviting.

SHAU has defined an ambitious tar get: to create 100 microlibraries throughout Indonesia.

Daliana Suryawinata (l) and Florian Heinzelmann founded the practice of SHAU in 2009 – together with Tobias Hofmann – which has established offices in Bandung, Passau, and Rotterdam.

“We bring books to the people!” – Florian Heinzelmann

Fibonacci Microlibrary as an “urban ruin” in the middle of the lush park. It is a pavilion made of lightweight concrete, open on all sides, and is therefore very inviting.
» Download high-resolution version (JPG, 2.31 MB)

Daliana Suryawinata (l) and Florian Heinzelmann founded the practice of SHAU in 2009 – together with Tobias Hofmann – which has established offices in Bandung, Passau, and Rotterdam.
» Download high-resolution version (JPG, 298.61 KB)

How do you get people to make use of books? By bringing the books to them. And by building libraries that attract people like a magnet. With its concept of microlibraries, the architects demonstrate how this is done – in Indonesia or anywhere else in the world.

Daliana Suryawinata and Florian Heinzelmann are probably just what you would picture as a modern cosmopolitan couple. They would likely feel at home anywhere in the world. Both studied architecture in their native countries: Daliana Suryawinata in Jakarta, Indonesia, and Florian Heinzelmann in Munich, Germany. They went on to receive their master’s degrees at the Berlage Institute in Rotterdam, the Netherlands, where they met and became a couple. In 2009 they founded the practice of SHAU – together with Tobias Hofmann – which has established offices in Bandung, Passau, and Rotterdam.

The two are involved in numerous projects. Daliana Suryawinata, for example, worked in the Netherlands with the renowned architects Rem Koolhaas and Winy Maas and managed the European branch of the Indonesian Institute of Architects. Florian Heinzelmann was a project leader for UN Studio’s Fraunhofer Institute – Center of Virtual Engineering in Stuttgart, which received a Gold certificate from the German Sustainable Building Council (DGNB). The responsible handling of social and environmental issues is always a central concern in all their projects.

SHAU has defined an ambitious tar get: to create 100 microlibraries throughout Indonesia. Of course, this is just a number, but it shows that the network should be substantial – with the advantage that synergies can be exploited. The mayor of Jakarta once said he wanted 100 shopping malls in his city; 100 microlibraries would be a fitting cultural counterpart. The surprising thing is that SHAU wants to custom design each of the 100 microlibraries.

87 percent of Indonesia’s over 260 million inhabitants are Muslim. The religion requires them to pay zakat – a tithe to the needy. Charitable organizations and projects for the poor therefore find it somewhat easier to get funding in Indonesia than elsewhere. Nevertheless, it was not easy for SHAU to finance and realize their first microlibrary. That was also because no suitable place for the building could readily be found. The first project was finally realized in Bandung, in the provincial capital southeast of Jakarta, where Daliana Suryawinata and Florian Heinzelmann have been living with their nine-year-old son since 2015. The mayor of Bandung, Ridwan Kamil, is an architect himself, and he was roused by the enthusiasm of his colleagues. The library was thus built with the support of Dompet Dhuafa, the City of Bandung, and the Indonesian Diaspora Foundation.

The first library “Taman Bima” was built on a pre-existing stage in a public square. The building protects and shades the previously open-air stage. It consists of a structural steel frame, concrete floor and roof, and walls built of 2,000 recycled plastic ice-cream containers. The plastic containers were installed in such a way as to provide pleasant lighting and natural ventilation in the library. The microlibrary is well used. For instance, classes from a nearby school visit every day.

The success of this first microlibrary encouraged the participants to realize a second facility of this kind in Bandung – and to take advantage of the experience gained through the first project. “Taman Lansia” is a simple low-tech box made of concrete, whose permeable facades allow cross ventilation. “Taman Lansia” was much easier to erect than the microlibrary “Taman Bima,” which, although spectacular in appearance, taxed the skills of the local craftsmen to their limits. The Lansia library also has a public prayer room and public toilets as well as the possibility for the “librarian” to sell snacks and drinks. Since he or she is not employed by the city, the librarian is able to generate income.

More projects are already in the pipeline: the “hanging garden library,” a sort of large staircase made from planter boxes with a rooftop viewing platform, and the “Fibonacci microlibrary,” which SHAU submitted for the LafargeHolcim Awards competition and was winner of the Asia Pacific Silver Award. The “Fibonacci microlibrary” is undoubtedly the most powerful design in the series so far. It is a pavilion made of lightweight concrete, open on all sides, and is therefore very inviting. It doesn’t look like a library at all, but rather a structure of open and semi-open spaces that cannot be fathomed at first glance – a place where every visitor finds their retreat for reading.

Using simple construction, this “micro” library creatively promotes literacy and community in Bandung and across Indonesia. 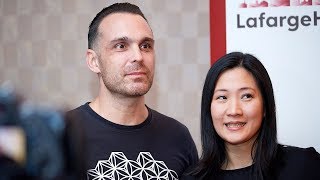