Nirmal Kishnani, Professor of Architecture in the School of Design & Environment, National University of Singapore (NUS) at the LafargeHolcim Awards jury meeting for Asia Pacific held at the Melbourne School of Design (MSD), Australia in July 2017.

Nirmal Kishnani participated in the Concluding Debate at the 4th International Holcim Forum on “Economy of Sustainable Construction” held in Mumbai, India in April 2013.

Nirmal Kishnani is Associate Professor of Architecture in the School of Design & Environment (SDE) at the National University of Singapore (NUS). He is also Program Director of the Master of Science in Integrated Sustainable Design at the NUS that aligns an interdisciplinary curriculum towards ecological concerns and teaches sustainability principles to architects.

He is Chief Editor of FuturArc journal, which focuses on green architecture in Asia, and resident jury chair of the FuturArc Prize and the FuturArc Green Leadership Award that he helped to establish.

He is Visiting Professor at the University of Navarra, Spain and was Vice Dean, School of Design & Environment at NUS (2014-17).

His areas of interest are environmental psychology (perception and behaviour in the built environment); climate, comfort and consumption; and, sustainable buildings (processes and outcomes). His research interests include high-rise buildings in the tropics that strive to create indoor comfort via passive, active and mixed-mode strategies. He has been active in the field of performance-based architecture, applying principles and methodologies that are now known as “green” since the mid-1990s.

Nirmal Kishnani holds a Bachelor of Architecture (hons) from the NUS (1988), Master of Science in Environmental Psychology from the University of Surrey, UK (1992) and a PhD from the School of Built Environment at Curtin University of Technology, Australia (2001).

He established one of Asia’s first consultancies dedicated to “greening” in 2002. As interest grew, his team advised developers and project teams across Asia including landmark developments such as the Asian Development Bank Retrofit in Manila, Khoo Teck Puat Hospital in Singapore, the Islamabad Airport in Pakistan and the Gardens by the Bay in Singapore. He has also lectured and conducted workshops on green design processes in Australia, Asia and Europe.

He has been a member of several advisory panels in China, Singapore and Vietnam shaping policy guidelines that affect design practice. Collaborating with FuturArc and BCI Asia, he has created new platforms for reporting green projects and sustainability in Asia. He is author of Greening Asia: emerging principles for sustainable architecture (BCI Asia Construction Information, 2012), as well as “Beyond Green - Liveability as Precondition for Sustainable Cities of the Future” presented at the Congress on Energy & Environment: “Zero Emission Cities, 2014” held in Vienna, Austria (2014).

He presented public lectures and panel discussions on “Green and Sustainable ideas for Australia” at events organized by Holcim Australia and held at Melbourne University, the University of New South Wales, Queensland University of Technology, and Curtin University in 2014.

He provided the keynote address “Is ‘Green’ enough? Four Mindsets of Greening in Asia that are Becoming Barriers to Sustainability” at the LafargeHolcim Awards 2011 ceremony for region Asia Pacific, held in Singapore and participated in the Concluding Debate at the 4th International Forum “Economy of Sustainable Construction” in Mumbai (2013).

For the first time, the jury meetings for the LafargeHolcim Awards were held virtually. One of the biggest challenges was that the jury members were located in many different time zones.

It was a full house at the Bandung Creative City Forum in the city’s historic quarter on October 31. Around 80 eager participants including architecture students and representatives of prominent architectural practices in Bandung gathered…

A jury of nine experts headed by Nirmal Kishnani, Professor of Architecture, School of Design & Environment, at the National University of Singapore, will evaluate entries in the 6th International LafargeHolcim Awards for the region of Asia…

The LafargeHolcim Foundation for Sustainable Construction counts upon competent support, especially in the technical field, and has established a network with renowned universities on all continents that host symposiums, jury meetings and…

A free translation of “Greening Asia: Emerging Principles of Sustainable Architecture” by Nirmal Kishnani has already been shared with over 300 students. The LafargeHolcim Foundation for Sustainable Construction and Holcim Indonesia…

“Greening Asia: Emerging Principles of Sustainable Architecture” by Nirmal Kishnani is one of the standard handbooks for building professionals, developers, operators, and academia. It aims to encourage sustainable design that addresses the…

Nirmal Kishnani recently talked about sustainable construction in the context of South East Asia and Vietnam, and also endorsed the Holcim Awards competition for its role in visualizing what a more sustainable future might look like. He… 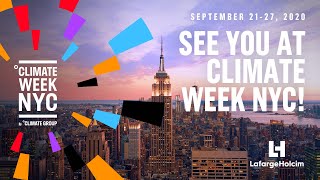