Anne Lacaton is Principal of Lacaton & Vassal Architectes, based in Paris, France.

She is also Associate Professor of Architecture & Design at the Swiss Federal Institute of Technology (ETH Zurich), based in Zurich, Switzerland, and a visiting professor at Polytechnic University of Madrid.

Anne Lacaton and Jean-Philippe Vassal are The Pritzker Architecture Prize laureates of 2021. “Not only have they defined an architectural approach that renews the legacy of modernism, but they have also proposed an adjusted definition of the very profession of architecture. The modernist hopes and dreams to improve the lives of many are reinvigorated through their work that responds to the climatic and ecological emergencies of our time, as well as social urgencies, particularly in the realm of urban housing. They accomplish this through a powerful sense of space and materials that creates architecture as strong in its forms as in its convictions, as transparent in its aesthetic as in its ethics.” – jury citation (in part), 2021.

Anne Lacaton and Jean-Philippe Vassal formed architectural practice Lacaton & Vassal in Bordeaux in 1987. The firm designed the Palais de Tokyo contemporary art gallery in Paris, completed in 2001. The bare bones reclamation of a semi-derelict art deco building near the Seine was short-listed for the Mies van der Rohe prize in 2003 and has been immensely influential as perhaps the most extreme of found-space galleries. Anne Lacaton and Jean-Philippe Vassal received the French Grand Prix National d’Architecture in 2008.

Openly proclaiming to be a reflection and search for architectural economy, the work undertaken by Lacaton & Vassal Architectes focuses on reduced-cost constructions in order to rejuvenate the dialogue with contracting authorities. Research on hybridizations, between a contemporary building concept and the use of the most diversified techniques, produces projects that make the most of construction programs by upsetting building contractors' standard usages.

In 2005, Lacaton & Vassal Architectes and architect Frédéric Druot were selected to reshape the Tour Bois le Prêtre, a 17-story housing tower on the city’s northern edge designed by architect Raymond Lopez in 1957. The team cut away most of the thick façade’s panels, installing balconies and large sliding windows in their place. Besides opening the apartments to more natural light, the units are being significantly enlarged and opened, and the firm installed new plumbing, bathrooms, ventilation, and electric systems. The project won the Design of the Year by the UK’s Design Museum (2013).

The practice has received the Erich Schelling Award (2006), International Fellowship of the Royal Institute of British Architects (2009), Daylight and building components of the Velum Foundation, Copenhagen (2011), Heinrich Tessenow Gold Medal (2016), and the Mies van der Rohe Award (2019).
Anne Lacaton studied at École Nationale Supérieure d’Architecture et de Paysage de Bordeaux where she met Jean-Philippe Vassal, and graduated from the School of Architecture, Bordeaux (1980), and obtained a Masters in Urban Planning at the University of Bordeaux (1984).

She was a keynote speaker at the 6th International LafargeHolcim Forum for Sustainable Construction in Cairo, Egypt (2019) where she presented how “Never demolish, always transform” is at the heart of the design process of Lacaton & Vassal including the renovation program of more than 500 dwellings in the Cité du Grand Parc in Bordeaux, France originally constructed in the early 1960s.

Celebrated for placing sustainability and humanity at the heart of their practice, Anne Lacaton and Jean-Philippe Vassal are the prestigious Pritzker Prize for Architecture laureates of 2021.

At a time when construction is still generating…

Anne Lacaton and Jean-Phillipe Vassal have been selected as 2021 Pritzker Architecture Prize laureates and are acclaimed for their work on public housing and sustainable design. Under the mantra of “Never demolish, never remove or replace,…

The jury of nine experts are currently selecting the global prize winners in the 6th International LafargeHolcim Awards for Sustainable Construction. The 33 finalist projects from 25 countries are displayed as a poster exhibition in Zurich…

Making do is about using what we already have. It is about considering the existing as a valuable resource, not as unsatisfactory or constraining. Each existing situation is an opportunity consisting of elements, qualities, and capacities…

University building in France details the holistic approach of Lacaton & Vassal Architects to the social, economic, and environmental performance of the Nantes School of Architecture, culminating in the production of extra space at no… 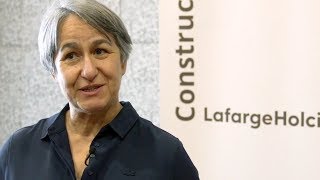 “We have enough existing materials – we can improve them and make them more effective,” explains Anne Lacaton following …